Covid-19 shows little measureable effect on Houston’s March home sales according to the latest monthly Market Update from the Houston Association of Realtors (HAR).  Even with some transactions interrupted before Governor Greg Abbott designated real estate as an “essential” service statewide as part of his March 31 stay-at-home order, Houston home sales were more than 11 percent ahead of the levels at this point in 2019.  Its impact on the Houston real estate market only began to set in during the last week of March, and therefore caused little disruption to the month’s overall performance. The full effect of the pandemic is expected to become more apparent when the April housing numbers are tallied.

March Monthly Market Comparison
Market readings for March were largely positive. The exceptions were inventory, which lowered due to strong consumer demand during the first half of the month, and pending sales, which declined in the latter half due to market uncertainty as the pandemic struck. Single-family home sales, total property sales and total dollar volume all rose compared to March 2019, and pricing levels reached March highs. Total active listings, or the total number of available properties, rose 2.6 percent to 40,932.

Single-Family Homes Update
Single-family home sales rose 8.2 percent in March with 7,566 units sold throughout greater Houston compared to 6,995 a year earlier. This marks the ninth straight month of positive sales. Prices reached the highest levels ever for a March while the median price incresed more than 4 percent to $249,900.  The average price rose 3.8 percent to $309,785. 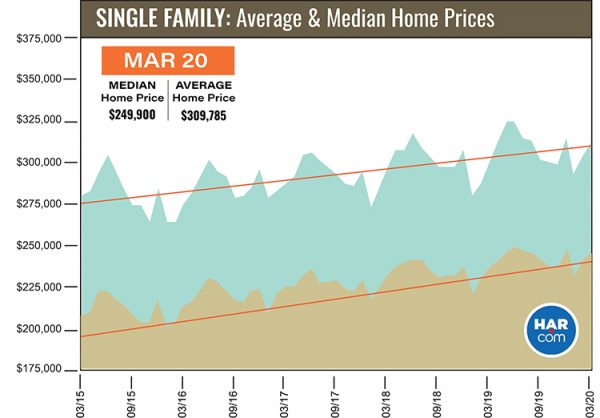